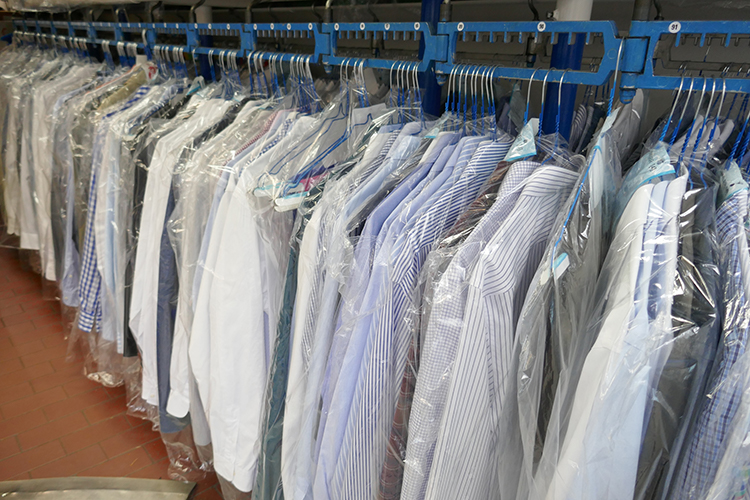 Let us care for your clothes like they are our own.

Our dry cleaning process uses fluids (not water) to remove stains and soils from fabrics. Water is usually unable to dissolve grease and oils and natural fibers like as silk and wool dry clean beautifully, but can shrink, distort, and even lose color when washed in water. Garments are usually labeled dry clean only but never hesitate to check with us about your cleaning needs.

Pair any of our services with our FREE pickup and delivery program.

The process of dry cleaning has been around since the early 1800’s in Paris. In the United States, the process was patented in 1821 by Thomas Jennings, who also happened to be the first African American to receive a patent! He ran a successful tailoring and dry cleaning business in New York City.

The first solvents were actually petroleum-based, which was an issue since they were highly flammable, causing an alternative to be sought after. Perchloroethylene (or PCE) was a non flammable solvent that was created by an English physicist and chemist in 1821, but it was not widely used in the drycleaning industry until the 1930’s when an American dry cleaner, WIlliam Stoaddard, further developed the formula for drycleaning use. Due to a petrol shortage due to WWII, the use of PCE as a solvent grew significantly in the 1930’s and 1940’s.

The dry cleaning process, despite its name, actually involved the use of liquids (other than water) to get items clean. Water can damage certain fabrics and the washing machine can damage things like buttons, sequins, and lace, which is where dry cleaning came into the picture.

Dry cleaners use a variety of solvents to clean fabric and detergents are added to solvents to help with the removal of soil. Detergents can aid in a few different ways when added to the dry cleaning process. First, they can aid in carrying moisture to aid in the removal of water-soluble soils. Second, they can aid in suspending the soil after it has been removed so it doesn’t get reabsorbed into the fabric. Lastly, it can act as a spotting agent to penetrate the fabric so the solvent can then remove the stains. Detergents are either added into the solvent before the dry cleaning process begins or they are added into the process at specific times.

As for dry cleaning machines, they consist of four parts. The first part is the holding tank or the base tank that holds the solvent. The second part is the pump that circulates the solvent through the machine. Next are the filters that trap all the solid impurities and soils removed from either the solvent or the fabric. Last is a cylinder or wheel where the items are being cleaned or placed.

During the dry cleaning process, the pump pulls the solvent from the tank and sends it through the filters to remove any impurities. The filtered solvent then enters the cylinder, where it interacts with the fabrics and removes the soil. The solvent then travels into the holding tank where it begins the process again.

After the items complete the cleaning cycle, the machine goes through an extraction cycle, which removes the excess solvent. During this process, the rotation of the cylinder moves at a faster rate, like you see in a machine wash at home on the final spin cycle. Once the extraction cycle completes and the cylinder stops moving, the clothes are either dried within the same machine (a closed cycle) or moved to a separate drier. The excess solvent is then collected, filtered, and moved back into the holding tank.

The loads are then taken out of the drier and laid out into carts that are given to our pressers. This is usually done by items, such as pants, sweaters, jackets and so on. The presses utilize water to create steam, which then gives the crisp lines that customers request!

Once the orders have gone through the cleaning and pressing, they are sent to the assembly line. The staff members compare the numbers on the tag that is located on the item to the invoices that are hanging up for the day. Once the number of pieces in the order aligns with the number of pieces physically hanging up, the order is then bagged, the invoice is attached to the bag, and it is placed with the other orders for the store that it needs to be taken to by the driver.

Sign up for our email newsletter to receive news and updates on deals and special offers at Morellis Cleaners.